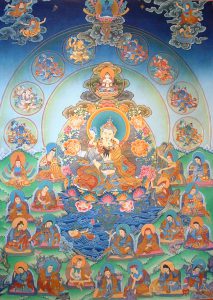 We are delighted to host our fifth Rigdzin Düpa Drubchen at PPI this year, with Tromge Jigme Rinpoche serving as Vajra Master. A drubchen (‘great accomplishment’) consists of 8-10 days of practice as a group, and when undertaken with altruistic motivation is traditionally considered to bring considerable benefits, such as reducing mental afflictions, restoring broken spiritual commitments, and establishing auspicious conditions for peace, harmony and further spiritual progress — both for oneself and on a much broader scale. Guru Rinpoche said that anyone who sincerely engages in a drubchen will gain the same benefits as practising for three years in a solitary retreat.

The Rigdzin Düpa sadhana belongs to the Longchen Nyingthig (Heart Essence of the Great Expanse) cycle, which relates primarily to the teachings of Dzogchen. This sadhana is the Inner Guru practice of the Peaceful Male Vidyadhara sadhanas which contain Outer, Inner, Secret and Innermost Secret Guru practices. This cycle was bestowed upon Jigme Lingpa (1729-1798)  through a series of three visions  he had of the great master Longchen Rabjampa (1308-1363), and was soon propagated throughout Tibet, becoming one of the most influential lineages of the Nyingma tradition that continues to this day.

Rigdzin Dupa has been practiced at Ati Ling since 2004 when we were honored to have His Eminence Tsikey Chokling Rinpoche bestow the empowerment and lead the retreat for the first time. From 2004 until the first Drubchen at Ati Ling in 2015, it was practiced as a 100,000 tsog offerings retreat. Jigme Rinpoche also holds the Rigdzin Düpa sadhana as the foundation for the annual one-month Dzogchen retreat in Brazil.

For more information and to register for this event please visit: atiling.org/rigdzin-dupa-drubchen-2019